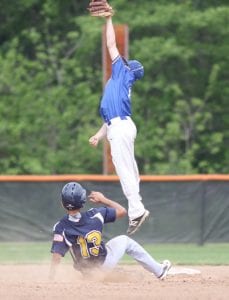 Nic Rodriguez steals second as the ball sails over the Elmwood second baseman’s head in the seventh inning of their regional semifinal.

Archbold advanced to the Div. III regional baseball championship game with a 4-0 win over Elmwood in the semifinals, Thursday, May 26, at Elida.

Lathon Babcock pitched a two-hit shutout for the Streaks.