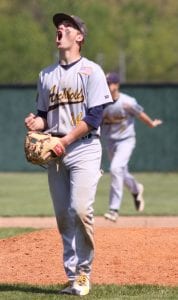 Leading 4-0 after one inning, Archbold survived a comeback by Fairview to win their Division III district baseball semifinal 5-4, Thursday, May 19, at Defiance College.

The Apaches came back in the second inning to tie the score at 4, where it stayed until the bottom of the sixth inning when Ben Bucklew scored on a single to left field by Lathon Babcock.

Bucklew came on to pitch with runners on first and second in the seventh inning and didn’t allow a run, striking out the final batter.