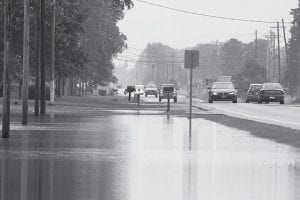 Traffic on US20A west of Burlington-Elimra passes by a flooded ditch on the south side of the road, Thursday afternoon, July 3. Heavy rain the night before caused flooding in several areas, and closed some highways in Fulton County and northwest Ohio.- photo by David Pugh