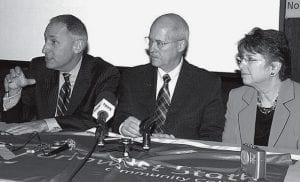 Eric Fingerhut, left, chancellor of the Ohio Board of Regents; Thomas Stuckey, president of Northwest State Community College; and Susan Tave Zelman, superintendent of public instruction of the state of Ohio, answer questions for the press following the NSCC State of the College program, Wednesday, Nov. 14. Collaboration between K-12 schools and public colleges and universities was a major theme of the event.- photo by David Pugh

Susan Tave Zelman, superintendent of public instruction for Ohio, outlined a plan to assist the 19,000 persons who drop out of Ohio’s K-12 education system each year.

She suggested the program could be field-tested at Northwest State Community College.

Speaking at the NSCC State of the College program, Wednesday, Nov. 14, Zelman said she wants to design a system “where nobody drops out; in fact, they drop in.

“What we want to do is invent a new type of program for those who are not successful in school and drop out. It would be a new partnership between the K-12 system and the university system,” she said.

Under her proposal, students who have dropped out of school can go to a two-year community college like NSCC. The college, in turn, would work with local school districts.

She proposed four parts to the plan:

•Academics. Zelman said those in the program will be put through diagnostic testing to determine what they need to know. Then, as they take classes, their coursework would apply to a high school diploma and an associate’s degree.

•Career-Technical. She said the program she proposes will have a strong career and technical component that will create a pathway to success. She pointed out Northwest State is close to the Four County Career Center.

•Apprenticeship-Internship. Zellman said the education system would work closely with business and industry, so students in the program will work while working toward their degrees.

“It will require strong partnerships,” she said.

•Support Services. Zelman said strong support services are required, like health and human services, transportation, “and doing whatever it takes to make these students successful.” She said state officials will try to incorporate the program into the state’s adult education program, and raise money to pilot the program across the state.

Zelman said over the past eight years, the State of Ohio has raised expectations and worked to give teachers “the tools they need.

Nine years ago, Zelman said Ohio was stuck in the middle in state rankings.

Further, a U.S. Chamber of Commerce study ranks Ohio 11th in academic achievement, while the National Assessment of Education has Ohio exceeding the national average and out-performing Michigan, Indiana, and other area states.

She said Ohio is “making slow but good improvement” in closing the achievement gap between the state’s low-performing students and higher-performers.

For other speakers- Thomas Stuckey, NSCC president, and Eric Fingerhut, chancellor of the state board of regents, which oversees public colleges and universities- the theme was collaboration.

“The level of education is the single greatest indicator” of future success, he said.

He emphasized that while the state had made a serious commitment to higher education in the latest biannual budget, colleges and universities must work together.

“Our guiding philosophy is no one school can provide everything the state needs, but all working together can,” Fingerhut said.

In his speech, Stuckey outlined Northwest State’s strategic plan, which includes increasing those who successfully complete training or graduate from one of the college programs, collaborate with other colleges and university, and provide retraining for the state’s workforce.