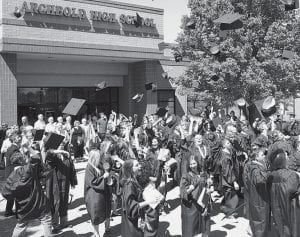 The 2:30 p.m. event was held in the high school gymnasium, which was nearly filled to capacity.

In the graduation program it was noted that 64 of the graduates are receiving a total of 98 scholarships. Included in the information were the names of the Ohio and out-of-state schools offering the scholarships.

David Deskins, Archbold Area Schools superintendent, reminded the graduates that many people have left “a stamp” on their lives, including parents, grandparents, family members as well as teachers and the school support staff.

“They have loved and supported you,” said Deskins.

He reminded the graduates they have a great opportunity to serve others.

Reading from a letter of praise that the class received from the Mennonite Disaster Service, Deskins spoke about 34 students who visited Ottawa, Ohio, in August 2007. They cleaned three of the many homes damaged by floodwaters. 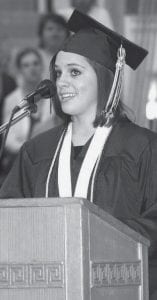 He said the families whose damaged homes were cleaned “will never forget AHS.”

In closing, Deskins told the grads, “Good luck and thanks for the memories! Dream big and never stop dreaming.”

Tim Meister, AHS principal, brought laughs from the graduates, their families, and teachers, when he said, “Your day has finally come. Patience is something you still need to work on!

“You have been exposed to reality. You have seen so much in 13 years, you have learned many things that have formed your character, you are potential heroes. You have created expectations.”

A rousing round of applause followed Meister’s remarks.

Speaking for the class was Audrey Boyers, class president, and Lucas Cameron, secretary. Boyers described the class as a complex group whose energy kept teachers on their toes. She said, “If teachers respected us, we respected them.” 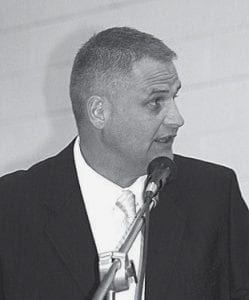 Boyers also said the class has come a long way, but they must not fall short of their potential goals. She thanked parents and teachers for their help. She closed by telling her classmates, “Don’t ever sell yourself short!”

Cameron said the class was remembered as being a little rowdy from kindergarten to middle school, but by graduation teachers questioned their reputation.

He said, “We are going into the big world and will be given big responsibilities.” In closing, he asked his classmates to stand and give their parents, teachers, and community a big round of applause.

The main floor of the gym was filled with parents, grandparents and the AHS symphonic band. Approximately 400- plus people were seated in the bleachers. 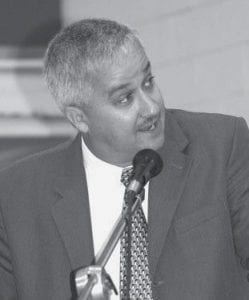 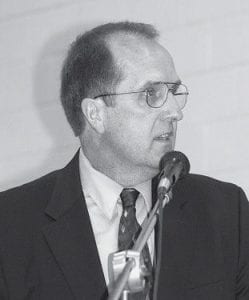 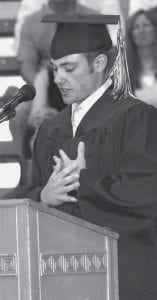