Did She Say Yes? 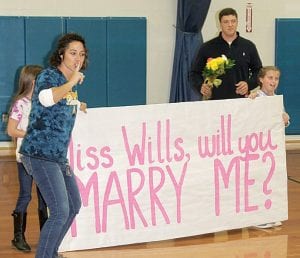 Above: Jennifer Hurst, an Archbold fourth grade teacher, cautions students not to give away the surprise during the Friday, Oct. 27 Super Streaks assembly. Collin Bzovi, with flowers, worked with some members of the school staff to put together a surprise proposal for his girlfriend, Miranda Wills, a fourth grade teacher. Left: Wills removes her blindfold, turns, and is shocked to find Bzovi on bended knee, offering her an engagement ring.– photos by David Pugh

Miranda Wills, a fourth grade teacher at Archbold Elementary School, moved her status from “girlfriend” to “fiancée” in a most dramatic way, Friday, Oct. 27.

During the monthly Super Streaks assembly, students were told the teachers would play a special game at the end of the program.

Five teachers were called out “at random.” Wills was one of those selected.

As part of the Super Streaks program, there are monthly themes. The theme for October was attentiveness.

The teachers were told to carefully observe the elementary school gymnasium, face the students in the bleachers, and then put on a blindfold.

They were told in one minute, there would be some things changed in the gym. They would turn around, take off their blindfolds, and write down all the changes they observed.

Once the blindfolds went on, the four other teachers were quickly whisked away, leaving Wills alone.

At the same time, Jennifer Hurst, another fourth grade teacher, and two students brought out a large white sign with pink lettering that asked, “Miss Wills, will you MARRY ME?” 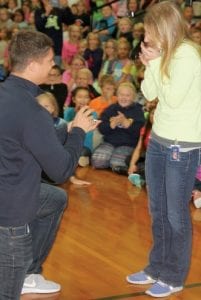 As she faced the students, her intended, Collin Bzovi, came up behind her and, following tradition, got down on one knee, holding up the small box containing the engagement ring.

“I was shocked,” Wills said in an email to this newspaper.

“I was expecting to turn around and start playing the game, and there he was on his knee!”

The combined five grades of students in the gym, of course, went wild.

Dorothy Lambert, AES principal, had a microphone for the public address system. She came up to Wills, pointed the mic in her direction, and asked for Wills’ response.

Collin’s cousin, Tripp Langenderfer, an AES second grader, came forward and gave Wills a bouquet of flowers as part of the proposal. 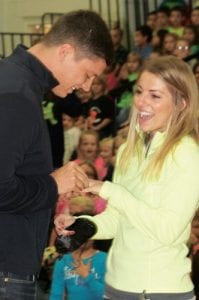 Bzovi slides an engagement ring onto the finger of Wills in front of hundreds of Archbold Elementary Students.– photo by David Pugh

Lambert said Hurst originally received a text message from Bzovi on Friday, Oct. 13, asking for help with his proposal.

The best way to keep the project a secret was to tell as few people as possible. Only four or five members of the elementary staff were in on the plan.

When the proposal took place, “everyone was very excited,” Lambert said. “I saw tears.”

A mother of a kindergartner said in a social media post her child came home and said someone “got married” at school.

Wills and Bzovi are both from Wauseon.

“We started dating in high school, and have been together for almost eight years,” she said.

The bride-to-be said a date has not been set for the nuptials.