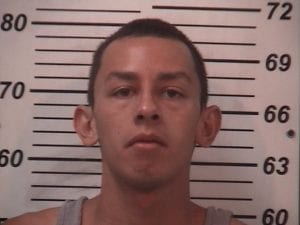 Jobe Gonzales-Reynolds, also known as Jobe G. Reynolds, and Jobe Arturo Reynolds, the alleged driver of a stolen car that lead Fulton County sheriff depuites on a chase, was being held on the Corrections Center of Northwest Ohio as of 10 am Thursday morning, July 19.

He is is charged with failure to comply with a police officer, operating a motor vehicle while under the influence, and failure to control.

Roy Miller, Fulton County Sheriff Department chief deputy, said officers were called to a mobile home park outside the village of Fayette on a report car stolen from a residence in the park.

As the deputy was driving to the trailer court, he spotted a car matching the description of the stolen auto at the intersection of Co. Rd. L and Co. Rd. 23 at about 8:47 pm. The deputy began pursing the car.

Spike strips, designed to puncture a fleeing vehicle’s tires and deflate them gradually, were deployed at Co. Rd. C and 21. The stolen auto hit the spike strips, and continued.

The chase turned to the west at the West Barre Road intersection, and raced into Archbold, turning north on South Defiance Street.

The stolen car, with law enforcement on its tail, went through Archbold, before turning back east on St. Rt. 2.

The chase then went east at Co. Rd. D, then turned north into Pettisville on Co. Rd. 19, Pettisville’s Main Street. The chase went through that community, continuing north.

Spike strips were put out at the intersection of Co. Rd. 19 and St. Rt. 2, but again, the stolen car maneuvered around the spikes, and headed west on St. Rt. 2.

Miller said plans were to deploy spike strips again, but a deputy’s crusier made contact with the stolen car near the intersection of St. Rt. 2, St. Rt. 66, and Co. Rd. E.

By this time, the stolen car’s front tires, damaged by spike strips much ealier in the chase, were destroyed and the car was riding on the metal rims.  At places on North Defiacne Street, marks in the pavement from the car’s wheels can be seen.

After contact with the FCSD crusier, the stolen car went out of control, and crashed into the north side of the Hit Trophy building on the southwest corner of the intersection at about 9:25 pm.

In addition to FCSD units, an Archbold Police officer assisted in the chase.

The driver, identified as Jobe Gonzales-Reynolds, 20, Fayette, was arrested and transported to the Fulton County Health Center, where he was admitted for medical treatment.

No information was about Gonzales-Reynolds was available from FCHC on Wednesday.

He was booked into CCNO that same day.

He is currently being held on the felony charge of failure to comply with the order or signal of a police officer.

During an initial appearance, held on Thursday morning in Western District court, his bond, which was initially set at $50,000, 10% allowable, was changed at the initial appearance to $50,000 cash; 10% not allowed.