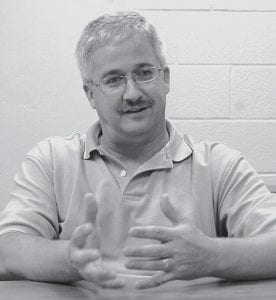 Dave Deskins took on his first-ever superintendency in Archbold Area Schools last July. “It certainly was as challenging as I expected,” he said. The superintendent hangs in the “delicate position” of providing opportunity for students while being sensitive to the community concerns. “You’re kind of at odds with those two demands,” he said. “There is a sense of wanting to try to please every entity.”- photo by Mary Huber

Dave Deskins’ introduction to the superintendent position was anything but typical when he accepted the job in Archbold Area Schools last July.

Sure, he had to acquaint himself with the community’s “local flavor” like any new superintendent, but there was also a controversial school levy pending in the face of a tighter Archbold economy.

Talk about diving in headfirst.

“It certainly was as challenging as I expected,” said Deskins of his first year on the job.

“How do we continue to provide all of the service and all of the options for our kids, and meet the requests and the needs that we’re hearing from people in the community?”

As Deskins found, it’s the key question all superintendents must address.

The levy was just one of many obstacles the school district faced last year.

After the levy’s second failure on the August ballot, Deskins gave over 70 presentations in the community to raise support and clear misunderstandings surrounding the initiative.

With knowledge of what Deskins calls “the pulse of the community,” the school board recommended a scaled-back levy to provide for students within the community’s financial ability. Voters approved it in November.

“I think there was an overall feeling in the community that this is vital,” said Deskins, “because if our schools remain strong, it helps our community remain strong.”

The levy brought the school financial stability- and its share of disappointments, including cuts in programs like the senior experience, and in staff positions, which increased class size and staff workload.

“I am so proud of how they have responded,” Deskins said of his staff. “They have stepped up to the requests that have been laid before them.”

If the levy wasn’t enough, Deskins also handled contract negotiations with the teacher association, replacing the district treasurer, and conducting an early retirement buyout, a process that hasn’t occurred in Ohio in nine years.

The time required by these issues was one of Deskins’ frustrations.

“I wasn’t able to focus on the educational issues that I got into this business to focus on,” he said.

“For the long-term benefit of the kids, those were all items that had to be addressed.

“But,” he said, “it put an undue pressure on my administrative team, my teaching staff, and my classified staff to carry the ball on the issues that I didn’t have time to give any educational leadership on.”

The year may have been frustrating, but it was also rewarding.

Deskins even called the levy “a blessing in disguise.” He said the campaign effort offered him the “huge advantage” of becoming familiar with his new home’s business leaders, a process which usually spans years.

Deskins was also pleased that time spent in Ridgeville Corners garnered the area’s support for the levy. He’d set the goal of achieving levy approval there after hearing Ridgeville often felt overlooked. “We’re here to serve all of our constituents,” he said.

Looking beyond the levy, Deskins believes the superintendency allows him to positively impact students. “As superintendent of schools, you now have the ability to have impact over the kids of all the buildings,” he said.

He plans to seek out opportunities to talk with students although he has less direct interaction with them than he had as principal.

“You do still have that impact, you just don’t have as much of it,” he said. For instance, last week, as he drove away from a local restaurant, he saw students sitting outside. “I rolled my window down and got to visit with them,” he said.

Other types of relationships were equally rewarding to Deskins. As part of a rookie team in a new superintendent/principal duo, Deskins and Tim Meister, Archbold High School principal, benefited from the experience of Archbold’s tenured administrators.

Meister “was able to have a fantastic year,” said Deskins.

Finally, living in Archbold, which Deskins calls “truly a unique place,” has been another bonus. “It’s a community where kids far outperform expectations and expectations are set to get the most out of them.

“And on top of that,” he said, kids learn from “some of the most brilliant teachers in the area and in the state.

Deskins is pleased with his family’s transition. “To have adjusted as well as they have, I think that was a pretty great accomplishment for us.”

He credits his family with the year’s success. “My family is important to me, even though there are times when they don’t get to see me much,” he said. “Certainly, I would not have been able to maneuver the year without the remarkable support of Holly and my two girls.”

Even though the school’s pressing issues have been tackled, being superintendent still won’t be a walk in the park.

Meeting government educational standards and raising revenue in light of the inadequate system for school funding are ongoing struggles – especially since they’re unlikely to be resolved by the government in the near future.

In the 10 years Deskins has been in education, he said, “Only one time in all of those years have I ever had a legislator walk in my building.

“And that was at a dedication ceremony of a new school where they wanted the publicity of being a speaker at that assembly.”

Congressmen may attend meetings with educational leaders, but Deskins said, the “bottom line” is that it’s his job to talk with people who desire to give more monetary support to schools but can’t afford it.

Congressmen, he said, “get to walk away from that, but I have to have those meetings.

“That’s a frustration that will remain.”

For now, schools must survive on creativity and “goofy ideas” like wind turbines, said Deskins.

Most superintendents don’t experience in five years the tough situations he faced in one, Deskins said.

It was a hard year, but, he said, “I’m one who very much likes a challenge. Absolutely, I’m still glad that I came.”

Deskins is ready for the coming year. “I am excited to be able to return to the role of being an educational leader in Archbold.”

He can now focus on generating relationships with staff and spotlighting student achievements.

“Let’s get back to the business of education,” he said.