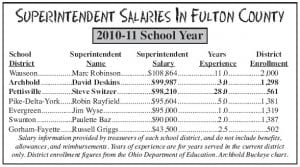 Superintendents of Ohio school districts have big jobs to perform, with big responsibilities.

As a result, they are compensated well.

Russell Griggs, superintendent of Gorham-Fayette Schools, will receive just $43,500 to run the district, which the Ohio Department of Education says has 502 students enrolled, the smallest in the county.

“I work half-time. I like the flexibility in my schedule,” Griggs said.

Griggs said he has good people under him who allow him to work part-time. That saves the taxpayers money.

Only one superintendent in Fulton County earns a salary in six figures, Marc Robinson of Wauseon. He will earn $108,864 during the managing the district, which has 2,000 students. He has been superintendent at Wauseon for 11 years.

Second is David Deskins, Archbold, whose $99,987 salary, a figure supplied by school officials, is just $13 shy of the $100,000 mark. Deskins has been superintendent for three years. The ODE enrollment is 1,298 students. 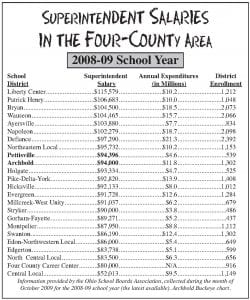 Steve Switzer, Pettisville superintendent, ranks third. With 28 years in the 561- student district, his salary is $98,210.

Robin Rayfield, Pike-Delta York superintendent, will earn $95,604. He has been on the job five years, in a district with 1,381 students.

Paulette Baz, with two years experience as superintendent of the Swanton school district, will earn $90,000. Enrollment there is 1,387, ODE said.

The Ohio School Boards Association conducted a survey of superintendent salaries across Ohio in October 2009, for the 2008-09 school year. It is the latest information available from OSBA.

There are 24 public school districts in the four-county area of Fulton, Defiance, Henry, and Williams.

That year, the Liberty Center superintendent had the highest salary, at $115,579.