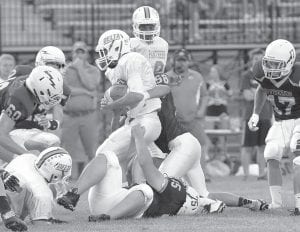 Archbold’s Jacob Rodriguez (58) and Justin Lovejoy (75) tackle a Delta Panther in the first quarter of their NWOAL opener, Friday, Sept. 5. The game was postponed with 10 seconds left in the first quarter after a storm rolled in. After play resumed Saturday, Sept. 6, the Panthers rolled to a 42-7 victory.– photo by Mario Gomez

The Panthers took the opening kickoff 88 yards for a touchdown on their way to a 42-7 win over the Blue and Gold.

“Delta is big and strong, and they have studs on the line,” said Bryan Miller, AHS head coach.

“We knew it was going to be tough going, and we couldn’t get anything going effectively.”

It wasn’t just the Panthers that struck. Mother Nature rolled in thunderstorms with plenty of lightning, and parts of northwest Ohio had torrential rain.

The lightning caused the game to be delayed until Saturday, Sept. 6, but not before Delta (2-1, 1-0 NWOAL) took a 14-0 lead on a 75-yard touchdown run by Bailey Storeholder.

Storeholder finished with 155 yards on six carries as the Streak defense had no answer for the Panthers’ ground game.

Delta finished with 305 yards on the ground.

Delta’s defense held Archbold scoreless in the first quarter, and when play resumed on Saturday the Panthers crossed the goal line on a Noah Parsons 4-yard touchdown toss to Ethan Edwards for a 21-0 lead.

Archbold’s offense struggled, and Delta’s Devon Richard came up with a Blue Streak fumble, rumbling 25 yards for a touchdown and a 28-0 lead.

The Blue Streaks’ lone score came on a Derek Walker 18-yard touchdown toss to Seth Mayer in the second quarter, but they still trailed 28-7 at the half.

Storeholder scored from 30 yards out and Parsons connected with Edwards for an 11-yard TD pass, both coming in the third quarter and locking down a 42-7 victory.

“It will be very hard for us to overcome mistakes. We have to be sound.

“Delta had the kickoff for a touchdown. That shouldn’t have happened; that was a simple breakdown.

“We had the fumble. That was a missed block, and the guy came in unabated and they scored.

“Those are simple things that can be fixed, but until we fix those things we will not be in many football games.

“We talked to our guys about playing with toughness and intensity. I know you are going to look at the score and say we got beat by 35 points, but at the same time, we made mistakes but we didn’t give up.

“We did do some good things. We are young and we are going to get better.”