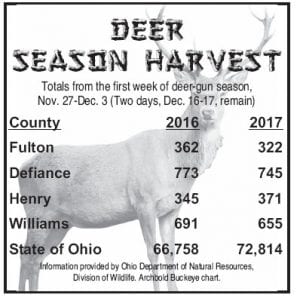 Hunters across Fulton County did well on the opening day of the deer-gun season in Ohio.

The season, in which hunters may use firearms to hunt deer, ran from Monday Nov. 27 to Sunday, Dec. 3.

Hunters may begin hunting 30 minutes before sunrise and must stop 30 minutes after sunset.