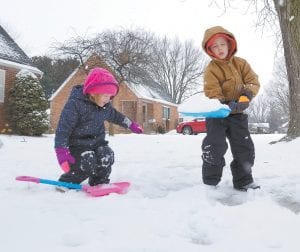 Ruby and Charley Sefranka, ages 2 and 6, from left, were out Monday afternoon helping shovel snow off the driveway of their Ditto Street home. About an inch and a half of snow fell Monday, followed by rain, which left some roads icy.– photo by David Pugh

As you read this, Archbold is expected to be in the grips of dangerous, even potentially deadly, cold temperatures.

As of yesterday morning, Tuesday, Megan Dodson, meteorologist for the Northern Indiana National Weather Service office, said winds are expected to gust to 30 miles an hour this morning, Wednesday, with a temperature of around minus 15 degrees.

“We could actually see wind chills a lot worse. For example, right around 7 or 8 am or so, we could have wind chills of about minus 45,” Dodson said.

With wind chill temperatures that low, exposed skin will suffer frostbite in 10 minutes or less.

“But wait, there’s more. The high temperature for (today) will be minus 10. That’s the high.

“The winds will pick up in the afternoon, the temperatures are still lower, so we really don’t get above 0,” she said.

“And then (tonight) is even worse, with a low of around minus 17, and the wind gusts… we have (predicted) around 20. The winds aren’t as bad, but the temperatures are low.” 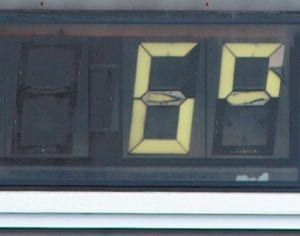 This sign in downtown Archbold registered the temperature as 6 degrees at 2 pm, yesterday afternoon, Tuesday. The high for today, Wednesday, is predicted to be 10 degrees below 0.– photo by David Pugh

Michael Lewis, National Weather Service meteorologist, said looking at historical records, “you have to go back to like the 1960s– the early 1960s– to see similar temperatures.

“Locally, dramatic cold temperatures are the most life-threatening of all the weather events we get, because of the exposure issues.

“Cold air like this really taxes your system, even for young people. You can actually be overcome by the cold in very short order.

“The elderly and the very young seem to be the most susceptible to hypothermia and this type of situation.

“The best thing to do is try to find a place to stay warm. Seek out shelter, seek out warming stations, and limit your exposure to the outdoors.

Steve Switzer, Pettisville superintendent, said after rain Monday afternoon and freezing temperatures Monday night, there was a glaze of ice over the roads.

He said closings for Wednesday and Thursday will be made on a day-byday basis.

Jay Selgo, Archbold superintendent said school was closed Tuesday “due to the icy conditions of some of the roads throughout the county.”

When asked about the rest of the week, he said, “We are currently monitoring the expected temperatures daily.

“When we are expecting arctic temperatures like the next couple days, we are certainly concerned for the safety of the students walking to and from school and waiting for the bus.

“Unless we get a tropical burst of air, I would say that it is unlikely that we will be in session on Wednesday and maybe even Thursday.”

Crews were not able to keep Woodland, Memorial, and Ruihley parks open, so they concentrated their efforts on Memorial and Ruihley, she said.

Lora Ripke, Archbold Area Chamber of Com- merce executive director, said some area businesses are closing in anticipation of the cold– including her office. She plans to be closed today, Wednesday.

Company officials are not expecting major trouble; if trouble erupts, it’s expected to be isolated.

Doug Westhoven, senior vice president of energy and operations at Ohio Gas Company, said in his 40-plus years with the company, he has never seen temperatures so cold for an extended period of time.

“This is one for the record books for Ohio Gas,” he said.

He said there is “absolutely” plenty of natural gas available.

Employees will be in early today, Wednesday, to monitor the performance of the company gas distribution system.

Rebecca Gobel, Fulton County Emergency Management Agency director, said she has been in touch with the Red Cross, discussing what shelters can be opened if there is a power failure.

She said shelters can’t be pre-opened, but can be open in a matter of hours.

“We’ll post on our Facebook pages the weather that’s coming our way and what you can do to be prepared for that,” she said.

“You know– grab your extra blankets and have them handy, if you have a second source of heat– get that ready, check on your elderly neighbors, have extra water ready just in case.”

Outdoor pets need to be brought in out of the elements.

“A garage, a basement, a room in the house, a barn with some straw…” she said.

Stray or outdoor cats need shelter as well– anything to get them out of the wind.

Outdoor pets will also need extra food to help keep up their energy.

For indoor pets, time outside should be limited. Like people, they are susceptible to hypothermia, particularly short haired dogs.

When they come inside, wipe their paws. Snow and ice can stick inside the pads of their feet, along with salt used to melt ice.

Dodson described the lateweek forecast as “the temperature roller coaster.”

The high temperature on Thursday is expected to be “a balmy 0. Then Thursday night, we have a low of around minus 5.

Snow is predicted for Thursday night into Friday.

Saturday will be dry; then snow changing to rain is predicted for Sunday.–David Pugh