Deadline Is Today For Candidates 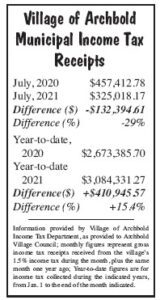 Candidates for some public offices, including Archbold Village Council, German Township Trustees, and Archbold School Board, must file their nominating petitions by 4 pm, today, Wednesday.

Those who file nominating petitions by today and have their petitions certified will appear on the Tuesday, Nov. 2 general election ballot.

Those running for council seats must obtain 50 valid signatures on their petitions. Those seeking school board or township trustee positions are required to have 25 valid signatures.

Voters in the village will cast ballots for council seats currently held by Vaughn Bentz, Chad Kern, and Brad Short.

Melanie Gilders, director of the Fulton County Board of Elections, said Kern and Short have filed nominating petitions for their seats.

Bentz had not filed as of yesterday morning, Tuesday, but is circulating nominating petitions.

In German Township, voters will elect two trustees. Up for election in the fall are Jason Pursel and Andy Brodbeck.

Pursel, who was appointed as a trustee in January, has filed a petition to run for election.

Pursel replaced Joe Short, who was elected to a post as Fulton County commissioner in November 2020.

Clinton Township voters will find two trustee seats– those held by Rick Frey and Ivan Hite– up for election. Both have filed their nominating petitions.

The two seats up for election in Franklin Township are currently held by Robert Keiser and Jack Rupp. Gilders said as of Tuesday, Keiser has filed petitions for reelection.

Voters in Gorham Township will have a wide variety of choices in November, with five candidates running for the two trustee seats held by Trevor Hibbard and William McKinney.

The list of candidates who filed petitions by yesterday, Tuesday, includes the incumbents, plus challengers Dennis E. Miller, Jason J. Simon, and Brian E. Towers, all of rural Fayette.

Three seats are up for election on the Archbold School Board.

Two are currently held by Karen Beck and Roel Galvan. Beck has filed her nominating petition for reelection.

A challenger, Skeat Hug, rural Archbold, has filed a petition.

He must now run for the remainder of his appointed term. Gilders said he has filed nominating petitions.

The Pettisville School Board has two new faces challenging for one of three seats.

The seats are presently occupied by Rick Graber, Brent Hoylman, and John King.

Gilders said after the petitions have been filed they must be certified by the Board of Elections.

The certification process involves checking the petitions to make sure they are filled out correctly, and to make sure there are enough valid signatures. The signatures must be from registered voters who reside in each candidate’s district.

For example, a person signing a petition for someone running for Archbold Village Council must live within Archbold.

The petitions will be certified Wednesday, Aug. 11.

Those who wish to cast ballots in the Nov. 2 general election must register as voters with the Fulton County Board of Elections by 9 pm, Monday, Oct. 4.

Voters who have changed their names (i.e., married), or addresses should notify board officials by that date.

In order to be a registered voter, a person must be a citizen of the United States, be at least 18 years old on or before the day of the general election, and be a resident of Ohio for at least 30 days prior to the election.