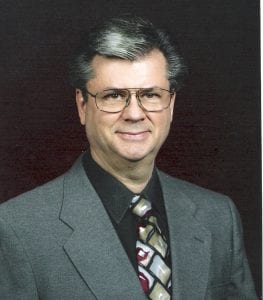 David R. Rand, age 63, of rural West Unity, died Sunday afternoon, Oct. 5, 2008, at Bryan Community Hospital.
He was born on Oct. 20, 1944 to Fred and Madelyne (Kohler) in Youngstown. He married Judy A. (Hutchison) on Dec. 23, 1967, and she survives.
David received his MBA in Accounting and Finance from Bowling Green State University.
He was a teacher at Northwest State Community College from 1980-2002, before retiring.
He attended the Evangelical Mennonite Church in Archbold, where he was a former Bible study leader.
He is survived by his wife of 40 years, Judy A. Rand of West Unity; a daughter, Darlene L. Eichelberger (Troy) of Goshen, Ind.; one brother, Fred T. Rand of California; and two grandchildren, Grace and Benjamin  Eichelberger.
He was preceded in death by his parents.
Funeral services will be Thursday, Oct. 9, 2008 at 11 a.m. at the Evangelical Mennonite Church, 300 Park St., Archbold.
Calling hours will be Wednesday from 2-5 p.m. and 6-8 p.m. at Orr Funeral Home (formerly Hollingshead-Beck ) in West Unity.
Burial will be at West Franklin Cemetery.
Memorials may be made to choice of the donor.–Posted 10.6, 2:55 p.m.