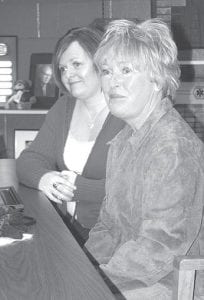 When Brenda Moore, closest to the camera, suffered a heart attack, her daughter, Jenni Nijakowski, began CPR right away. Jenni’s actions are credited with saving her mother’s life.– photo by David Pugh

At a Wednesday, Feb. 9, press conference, Jenni Nijakowski said Brenda, her mother, was working on the family computer and talking with Jenni’s daughter, 10- year-old Sophia, around 10 pm, Saturday, Nov. 27.

Suddenly Brenda passed out, fell off her chair and hit her face on the desk before sliding onto the floor.

Sophia reacted quickly, getting her mom and dad.

When Jenni went into the living room, she found her mother on the floor. Brenda’s skin had taken on “a ghastly, grayish-blue color,” Jenni said.

While her husband, Christopher, called 911, Jenni checked to make sure her mother had nothing in her mouth, then began compression only CPR, a skill she had learned just months before.

Jenni said she didn’t have any question about doing CPR on her mother.

“Honestly, there was no thought at all,” she said.

“You just do it. Because it was my Mom, I probably did it that much harder.” EMS Response

The Nijakowskis live outside Swanton on Fulton Co. Rd. 1, on the Fulton side of the Fulton-Lucas county line.

Their call was first directed to the Lucas County 911 system, then to Fulton County, which dispatched the Swanton based ALS-7 paramedic squad and Swanton Rescue.

It took about 15 minutes for the ambulances to arrive. Jenni performed CPR the entire time. Paramedics and rescue workers had her continue while setting up their equipment.

“On the third shock, they were able to get a beat,” she said.

In all, Jenni estimated (Continued from first page) paramedics worked on her mother for 10 minutes on the living room floor, before taking her to meet a helicopter ambulance.

Brenda spent 11 days as a patient in the University of Toledo Medical Center. Four of the days, she was kept unconscious medically.

A slender woman on a small frame, Brenda had none of the classic risk factors for sudden cardiac arrest.

She had suffered a respiratory infection prior to the event, so doctors theorize the virus attacked her heart. Praise

“If you follow the American Heart Association chain of survival, everything happened that day that was supposed to happen,” he said.

That was followed by the involvement of 911 services, then skilled rescue workers, the helicopter ambulance, and eventually, hospital care.

Life-saving awards were presented to members of ALS-7, Swanton Rescue, and Jenni at the conference.

Today, Brenda has a small defibrillator implanted in her chest.

If her heart rate exceeds 200 beats per minute, it automatically administers an electrical pulse to shock her heart into proper rhythm.

Jenni said so far, her heart rate has hit a high of 120 bpm, after eating spicy food.

“She has to watch what she eats,” Jenni said.

The only ill effect, Jenni said, is that Brenda suffers some short-term memory problems, which family members tease her about.

“How do I say thank you?” Brenda asked the paramedics and others at the news conference.

Barricades are so-called from the French barrique, or barrel, of which barricades were made during a Paris insurrection in 1588.