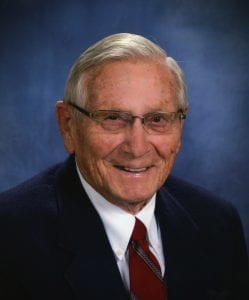 Dale H. Pape, age 87, of Archbold, passed away Friday, Feb. 1, 2013 at Community Health Professionals-Defiance Area Inpatient Hospice.
Prior to his retirement, he had been Vice President of Manufacturing at the former LaChoy Food Products in Archbold, where he had worked from 1945 to 1987.
Dale was Archbold’s 1992 Citizen of the Year.
Dale was born in Archbold on Feb. 8, 1925, the son of Henry C. and Nancy (Liechty) Pape.
On Dec. 18, 1946, he married Mary Lou Kluepfel, who preceded him in death in 1990.
Dale was a member of the Archbold United Methodist Church, where he served in many capacities.
He was a Staff Sergeant in the U.S. Army during WWII.
His memberships include the Archbold Lions Club, where he was a charter member and past president; the Archbold Rotary Club; and  the Archbold Fire Department.  In addition, Dale was a member of the Grand Lodge #0179 of the F.&A.M. and a 68-year member of the Archbold American Legion B.L.W. Post #311, where he was a past commander.
In addition, he served the Village of Archbold as a member of the village council for two terms and the Archbold Area School Board of Education from 1965 to 1973.
Further, Dale served on the board of the Fulton County Red Cross and as a volunteer for the Fulton County Health Center.
Since his retirement, Dale’s favorite past times have been spending summers at Hamilton Lake, Ind., fishing and enjoying time with his family and friends.
Surviving are four sons; Steve (Jeanne) Pape of Archbold, Randy (Ro) Pape of Hamilton, Ind., Mark (Pam) Pape of Ashland, Dan (Ann) Pape of Mt. Pleasant, S.C.; grandchildren, Stephanie Pape Mosteller, Susan Pape White, Jennifer J. Pape, Liz Pape Noak, A.J. Pape, Laura Pape, Catherine Pape, Caroline Pape; and  great-grandchildren, Sydney Mosteller, Aidan Mosteller, Grayson Mosteller, Lily Noak, Devon Noak, Tyler Pape, Brooke Pape, Andrew White, and Nolan White; and one brother, Henry Pape, Jr. of Bryan. He is also survived by special friend, Ann Beck of Archbold. Two sisters, Velma Pape Miller and Florence Pape Bernath, also proceeded him in death.
Visitation will be held at the Archbold United Methodist Church from 2 p.m. until 8 p.m. on Friday, Feb. 8, 2013.  A celebration of Dale’s life will be held at 11 a.m. on Saturday, Feb. 9, 2013, at the church. Interment will be in the Archbold Cemetery.
The family requests that memorial contributions be donated to the Archbold United Methodist Church, the Archbold Fire Department, Community Health Professionals-Defiance Area Inpatient Hospice, or the Black Swamp Area Council of the Boy Scouts.
Online condolences may be offered to the family at www.grisierfh.com. Grisier Funeral Home in Archbold has been entrusted with arrangements.-Posted 2.1, 5 pm