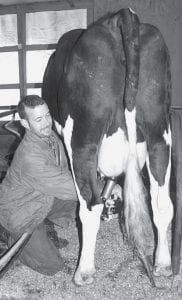 David Knisley, rural Fayette, attaches a milking machine to a cow’s udder on his family’s farm, a job he has done every day, twice a day, for more than 10 years. He talked about his family’s farm operation, about finding time for family, and mega-dairies. – photo by David Pugh

How many times do you go to work?

Say you’ve got an average job. Start with 365 days in a year, take out 104 days for weekends, plus another two weeks for vacation.

Now consider the Knisley family of rural Fayette. The Knisleys operate a dairy farm; Darrel and Jane, father and mother; David and Tracy, son and daughter-in-law; and David and Tracy’s children- their son Kristoffer and 14-year-old daughter Katie.

(David and Tracy have another daughter, Michelle, who does not work on the farm.)

Cows have to be milked twice a day. David hasn’t missed a milking in quite a while.

“In May, we passed 10 years without ever missing,” David said. 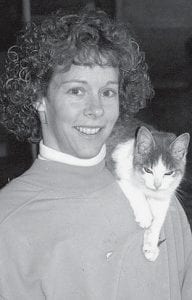 Tracy Knisley, with one of the 40 cats who live on the family dairy farm. Just like the cows, each cat has a name.- photo by David Pugh

That means every day, day in and day out, David and most of his family have been in the same place every day, doing the same task.

While many would see such a task as pure drudgery, one can’t help but hear the enthusiasm in David’s voice for his job; his way of life.

David still finds time for an off-farm job and for family activities; they just schedule theirs differently from others. They’ve taken time to visit area botanical gardens; they’ve gone to the ballet.

They’ve even been known to leave after finishing the morning milking, drive to Chicago, see a few of the sights, then race back to the farm to milk the cows again.

There’s a lot of work to be done, but David said they follow the old saying, “Many hands make small work.”

Even though his parents are in their 70s, they still work in the barn. David handles the milking machine. Tracy assists, shoveling the sawdust used for animal bedding.

Katie, the youngster, does her share of the work as well; her 100-pound frame moving 1,000-plus pound cows here and there.

Isn’t this the way of life that the factory farms and the megadairies were supposed to drive into extinction?

Not so, David said.

“If you look around, there are no mega-farms in sight. All of them are local farms. We have neighbors (where the) grandpa’s 88; he and the grandson work together. The son has a place, the grandson bought a place, but it’s still basically a family farm.

“We have some big crop farmers who farm 1,000 acres, but when you get to the nitty-gritty, it’s probably two brothers, two brothers and a dad, grandpa and a couple of grandsons. Maybe they got bigger equipment, but you really look at it, it’s still a family farm,” David said.

On the Knisely family farm, of 90 total animals they milk about 35 to 42 cows at a time.

And they have no desire to expand.

For their operation, any problems that develop are manageable. If they were to increase the number of cows, the potential problems increase.

Take, for example, manure. The animals on their farm produce enough to fill a large manure spreader every day. They are fortunate to have five or six farmer friends who use their manure as fertilizer.

“A man was just sure the mega-dairies were going to run us out of town. I said they’ll bury themselves in manure. If you exponentially change the number of cows, you exponentially increase the amount of manure.

“That’s where these guys (mega-dairy operators) run into trouble.

“People say, ‘Aren’t you going to expand?’ I say, ‘Absolutely not. We’ve got just exactly what we think we can handle,'” David said.

But what about ethanol? Ethanol plants are expected to use large amounts of corn, which cattle eat, to make ethanol alcohol for motor fuel.

“I’ve heard about ethanol for 15 years, but I don’t see any pumps (at gas stations).

“Ethanol using up part of our commodities? That hasn’t come about very fast.”

He said the prices of the commodities the farm uses are up, but right now, the milk they produce is brining its highest price ever.

To help with the bottom line, David said their farm is the ultimate recycling place. An example: hay the milk cows don’t eat goes to other animals, and eventually gets recycled into bedding.

Spending every day with the cows allows them to get to know the animals and personalities.

A lot of times, cows will go back to the same stall in the barn to be milked.

“They’re like co-workers; you have to decide which office they work in best,” he said.

He points to some of the red and white cows in the barn.

“Most of the red ones, they’ve been handled a lot. They’re more exotic. They’re more common than they were 25 years ago, but we have often taken them to show, or the kids have played with them.

“They’re a little more prima donna. They know it and they act it!” he said.

Reflecting, David said, “We certainly wouldn’t consider ourselves wealthy, but you get what you have by showing up to your job.

“Our job just happens to be this.

“You count your blessings,” he said.