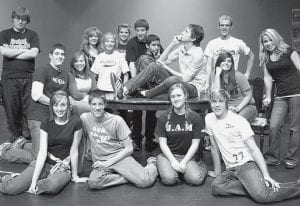 Archbold High School’s fall play, Curtain Going Up, is a play about a play, said Belana Antar, an AHS senior and actress in the performance.

It’s about high school students, their teacher-director, and others as a high school play is prepared for the public.

Jessanna Buschur, another senior, said it’s about “a teacher dealing with the crazy happenings of what goes on” in the rehearsal and production.

“Everything that could go wrong, goes wrong,” Buschur said.

It’s something that the veteran AHS actors can relate to.

“Whenever you put a group of dramatic people together, you put a lot of personalities together. The end result is- drama,” Buschur said.

“There are definitely conflicts with people. We draw from that conflict offstage, to take onstage,” Antar said.

One of the boys points to the guy next to him and says the two of them actually hate each other, so they’re able to draw on that emotion.

But then the other adds, “We joke around a lot.”

“To appeal to the ladies,” said Jacob Gobrogge, a senior.

“And some men,” Haley Behnfeldt, a sophomore actress, said.

Antar said what some of the seniors have enjoyed is watching freshmen and other new-toacting students.

She said one boy in particular was so scared when he first started rehearsals. As rehearsals continued, he’s grown, as an actor and a person.

At one point, she said she “got in his face” to try to get him mad, so he could use the emotion in his acting. But all he did was apologize for whatever he had done wrong.

Directing this year’s play is Garrett Leininger, a senior and veteran of the AHS stage.

Directing is definitely different, he said.

As the director, he said he has to think about “how the actors will feel when I say certain things.”

He said he has to know what to say to help the actors understand what he wants, in terms of staging, vocal inflection, etc.

Rehearsals started in September. Leininger said one of the big problems was that so many of his actors were involved in sports, he had a diffi- cult time filling in roles so they could rehearse.

But, as the opening curtain approaches, Friday, Nov. 7, at 7:30 pm, everything is coming together, he said.

“You don’t think it will (come together), but it always does,” he said.

All the student-actors said Curtain Going Up is a fun show.

“People are going to get a kick out of it,” said Bethany Jelen, a senior actress in the show.

Curtain Going Up will also be presented at 2:30 pm, Saturday, Nov. 8 and Sunday, Nov. 9 at the AHS auditorium.- David Pugh