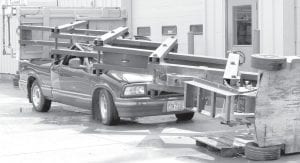 Matthew Wagner’s crushed pickup truck lies underneath a scissors lift in the parking lot at Black Swamp Equipment. A thunderstorm brought heavy rain and high winds through the village about 11:30 am, Monday, May 31. Wagner was in the truck when the lift, which was partially extended for display purposes, fell. He managed to duck his head out the open driver-side door and avoid serious (possibly fatal) injury. The pickup was a total loss.–photo by Mary Huber

Matthew Wagner admits that after his mini-pickup truck was crushed by a falling scissors lift on Memorial Day, he was “a little freaked out.”

Wagner had driven the truck, which he only owned for about two months, to the Black Swamp Equipment store on East Lutz Road and parked near the scissors lift about 11:30 am.

A strong gust of wind pushed the partially-extended lift over.

“I had shut the truck off, opened the (driver side) door, looked up, and it (the lift) was almost on top of me.

The impact was loud, and Wagner said he remembers “glass flying everywhere.”

When it was over, “I just got out of the truck and made sure I was all right,”

“It was one of those freak things. I happened to park in the right spot at the wrong time,” he said.

Wagner said the only injury he suffered was a nick on one elbow.

His truck “didn’t fare so well.”

With the cab, hood, and part of the bed crushed, it’s a total loss.

“It didn’t have many miles on it, and there was no rust,” he said.

A pickup truck owned by Lam Van Tran was parked in his driveway at 212 De- Groff, when a tree fell on it.

In Pettisville, the Memorial Day parade was underway as black clouds boiled up in the west.

Parade organizers decided to move the Memorial Day ceremony to the Pettisville School.

Everyone made it inside before the rain hit.

The past few years have been quiet, she said.

“The way things set up yesterday (Monday), there was a cold front coming from the west-northwest, and there was a good southerly flow that brought in a lot of moisture,” she said.

That resulted in pulsetype thunderstorms leading the front.

“They tend to dome up quickly and fall apart quickly, and you tend to get heavy rainfall– it’s common for storms like that, with a lot of lightning and big bursts of wind,” she said.

Later, as the cold front edged through, more thunderstorms hit.

“Nothing unusual for this time of year.”

Wiesser said rainfall was in the two-to three-inch range, with water reported over roadways in many places.

In addition, there were reports that some area river levels were up– not yet to flood stages, “but it’s something we want to watch,” she said.

The Archbold wastewater treatment plant recorded 2.4 inches on Monday, but some reports were in excess of three inches of rain.