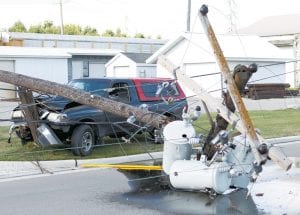 Three electrical transformers lay on the ground, and at least one is leaking a mineral-oil based substance, following an accident, Sunday, Aug. 13. The pickup in the photo struck the utility pole, which brought down the transformers and damaged a second pole.– photo by Mary Huber

A pickup knocked down a utility pole, Sunday, Aug. 13, causing a spill of oil from at least one of three transformers.

Archbold police had not completed their report on the crash by press time yesterday, Tuesday, but did say the crash occurred about 5:40 pm on East Mechanic Street, near Middle Street.

Chris Eck, spokesman for Toledo Edison, said the transformers contain mineral oil, which is used as an insulator.

“It keeps the transformers from overheating,” Eck said.

“It’s about the consistency of baby oil. It’s relatively harmless, but when there’s a spill we require that it be cleaned up.”

In the past, transformers used an oil that contained PCBs, or polychlorinated biphenyls. Eck said PCBs are known cancer-causing agents.

They placed absorbent booms to prevent further oil from reaching the storm sewers, and used an “oil dry” material to contain the spill until the Toledo Edison contractor arrived.

The driver of the pickup refused treatment by Archbold EMS crews.