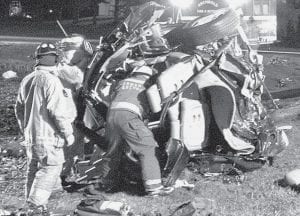 Archbold rescue workers freed Ramona Steffel, 57, Bryan, from the wreckage of her minivan after a collision at the intersection of St. Rt. 2 and Co. Rd. 22, Saturday night, April 12. Rescue workers had to bring her out through what was left of the rear of the vehicle.- photo by David Pugh

Ramona Steffel, 57, Bryan, was hospitalized in Community Hospitals and Wellness Centers- Bryan, following a two-vehicle crash at the intersection of St. Rt. 2 and Co. Rd. 22.

The Ohio State Highway Patrol report on the Saturday, April 12 crash states Steffel was driving a minivan west on the highway, while Terry Beaverson, 49, rural Wauseon, was driving a second minivan north on Co. Rd. 22.

There were two passengers in the Beaverson vehicle, Nichole and Beverly Beaverson, of the same address. Their ages were unavailable.

At about 11:41 pm, the OSHP report states Terry Beaverson failed to yield the right of way at the intersection, and the minivans collided.

The report states the Beaverson minivan went off the west side of Co. Rd. 22 and struck a stop sign before coming to rest.

The Steffel vehicle went off the northwest corner of the intersection and struck a utility pole, before rolling onto the driver side.

Archbold Rescue and Fulton County paramedic unit ALS-1 responded to the crash scene. The Beaversons were taken to the Fulton County Health Center, where all were treated and released.

Steffel was transported to Archbold Hospital, and then transferred to Bryan, where she was admitted. She was listed in good condition on Monday.

No citations were issued as of Monday.