Ridgeville's Josh Henry Is Living A Life Of Adventure 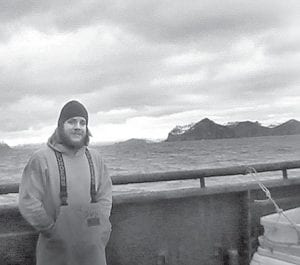 Josh Henry, on the deck of an Alaskan fishing boat in the Bering Sea. While statistically proven to be one of the most dangerous jobs, Henry downplayed the danger, saying as long as the boat’s crew and captain communicate, it’s no more dangerous than many other jobs. Henry’s past jobs include being a musician and bartender.– courtesy photo

(Editor’s note:
This is

the first of a two-part series
on the adventures of Josh
Henry, who has worked in
the dangerous Alaskan fishing

Josh Henry is almost 26 years old, not married, and leads an exciting lifestyle.

The Ridgeville Corners native played in a state boys basketball tournament when he was in high school, attended college, played guitar and sang in clubs and bars, rode a bicycle 2,400 miles, and eventually went to work in the most dangerous industry on earth– crab fishing in the Bering Sea.

Based on 2006 statistics, crab fishermen suffer 141.7 deaths per 100,000– more than pilots, flight engineers, and loggers, the next three most dangerous jobs.

He thought it seemed interesting and unordinary.

After graduating from AHS in 2003, he went to Youngstown State University for a year, then went to the University of Memphis (Tenn.) for a semester.

“I started playing (my music) in bars and clubs in Memphis and New Orleans (La.),” he said.

But he remembered the crab fishing special.

“I heard I could make some money. I was newly off my parents’ medical insurance and a dropout from college who had to pay student loans, so I went to Alaska.”

His first trip was in January 2008. He worked for minimum wage on a barge that processed crab 16 hours a day, seven days a week, and lived in a tiny dormitory.

“You stay on the barge,” said Henry. “Basically, it’s just a small floating city. You find people from Africa, Mexico, and a lot of people from the Philippines.”

While the money was small and the hours long, “I still look back on that as being something I take more pride in than what I’m doing now.

“I thought pitching crab was a harder job than fishing for it, because you think about what you make an hour.

“I worked two years in six months. What I came out with in that paycheck for six months, I can make in a month now.”

After getting off the barge, he took a three-month road trip, returning to Alaska in August 2008.

His next job was on a boat that catches fish, and prepares, or processes, them for shipment.

“We were catching basically fish sticks– pollack and cod.

“It was more money than working (on the barge), but it’s the factory work that you’re already accustomed to. But now you’re doing it in the middle of storms.

“You have header machines, which cut off the fish heads, and all of these moving parts, and you have 15 guys crammed into this little area. There were a lot of fights.

“Unless you were a deckhand… some guys, who just work in the factory, couldn’t see outside. They just saw these rooms, with really loud music and loud machinery and fish guts everywhere.

“During storms, when you’re working, it’s really not that big a deal because it’s part of the job.

“But when you’re taking a shower, and you’re getting thrown out of the shower, or your cereal ends up on the wall, or somebody doesn’t tie down the coffee pot and you don’t have a coffee pot for five days– those are the things that get to you.”

After his 75-day contract on the processor was completed, “then it really gets interesting.”

(Editor’s note:
Next week,
Josh describes a trip to Hawaii,

a few weeks back in
Ohio, and fishing the Bering
Sea.)