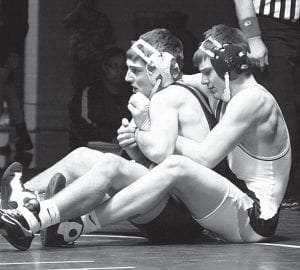 The Northwest Ohio Athletic League wrestling meet marks the end of the regular season and means the start of the second season is just around the corner.

Both are juniors. It is Cowell’s second title and Ripke’s first.

Cowell was the number one seed in the 140-pound weight bracket. He marched his way to the crown with a 15-0 technical fall over Patrick Henry’s Cory Reese and a pin at 2:48 of Bryan’s Jake Robb, putting him into the championship match against Delta’s Tyler Fahrer.

Fahrer was the number two seed in the tournament. 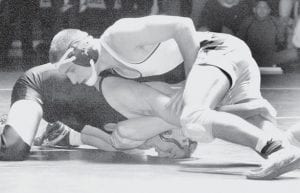 Jordan Cowell, the number one seed at 140 pounds, recorded an 18-5 major decision over Delta’s Tyler Fahrer to win his second league title.– photo by Scott Schultz

Fahrer started down to start the third.

Cowell showed the optional start, giving Fahrer another point. From there the Archbold junior went to work, recording an 18-5 major decision to claim his second league title.

“Jordan was looking forward to wrestling Fahrer,” said Brian Becher, AHS head coach. “He wrestled him earlier at the dual meet and it was a tight match.

“Jordan had some calls going against him tonight, but that usually works in our favor in the grand scheme of things, because when the calls go against Jordan he picks up the intensity.

“It puts a little fire under him, so I actually like it sometimes when he gets calls against him. He picks it up to the next level.”

With the sectional tournament starting Friday, Feb. 18, Ripke (152 lbs.) is peaking at the right time.

Up next was Liberty Center’s Jimmy Spieth, the number one seed.

Ripke recorded a 7-5 decision, putting him into the final where he would face a family deep in wrestling tradition and the number two seed: Delta’s Tyler Yant.

Ripke got out of the blocks early, scoring a takedown, and held a 2-0 lead after the first period.

The two started neutral to start the second.

Ripke scored on a takedown and put Yant right to his back to pick up two near fall points.

Yant was shut out in the period.

The Archbold junior held a 6-0 lead and was two minutes away from picking up a league championship.

Ripke started in the down position to start the final period and tallied two more points on a reversal.

Yant managed an escape and a takedown to close the gap to 8-3, with Ripke picking up a point on an escape.

Yant again took Ripke down and let the junior up, closing the gap to 10-5.

“Austin is starting to think he is good, and he seriously thinks people can’t beat him,” said Becher.

“Austin is putting in the extra time, working out on Sundays and before school, and it is paying dividends for him.

"As long as he keeps wrestling like this he can do great things for us.

“Yant is a great kid, a twotime state qualifier, and you know Archbold-Delta. We like to beat them and they like to beat us, so that is extra incentive, also.

“And that win kind of decided second place in the team standings.

“Obviously you want to get first, but second is the best we could have got.”