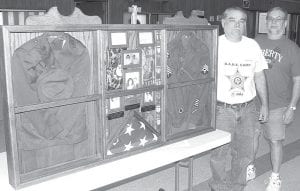 Dave and Doug Fedderke, from left, with the display case containing the uniforms their parents wore during World War II. Their mother, Marcella, whose uniform is on the left, was a member of the Marine Corps. Their father, Maynard, served in the Army. When the parents were discharged, the uniforms were hung in a closet, where they remained for almost 70 years.– photo by David Pugh

A man and a woman both serve during World War II. He is in a dangerous combat zone job; she is stateside.

After the war, they meet, marry, and raise a family.

They tuck their uniforms away in a closet and go on with their lives. The items remain there for almost 70 years.

It’s part of what’s become a tradition that started about a decade ago at the Ridgeville Legion.

The Fedderke sons have separate houses on “the home place,” the farm where they grew up in Adams Township, Defiance County.

It was also the home of their father, Maynard.

Maynard joined the Army on Sept. 1, 1942, just about eight months after the Japanese attack on Pearl Harbor brought the United States into World War II.

He was assigned to the 703 Engineering Company.

The 703rd was involved in campaigns in North Africa, Sicily, and Italy. Their job was to build pipelines to move gasoline from the coast, where the gas was delivered by ships, to the front lines of the battlefield.

The pipelines weren’t buried; they were just laid over the ground.

Doug said much of the time, members of the 703rd worked within the range of enemy artillery. At any moment, shells would start falling around them as they worked on pipelines full of gasoline.

Marcella Vitous, their mother, grew up on a farm near Antigo, Wis.

Her mother died when she was six. Marcella and a sister took over running the household.

When war broke out, she was the first person in her county to enlist.

She spent the war years as the librarian at the Cherry Point, N.C., Marine base.

“Every time Mom talked about it, she would tear up,” Doug said.

“Being in the library on base the whole time, she watched the kids coming in. The longer the war went on, the more she wondered who would come back, and who wouldn’t.”

Doug said in the Marine Corps, their mother’s best friend was Bonnie Wade. Marcella would come to Defiance to visit Bonnie.

Bonnie’s husband, Wayne, was a friend of Maynard.

“They kind of all got together, and it took off from there,” Doug said.

Their father farmed and ran a repair shop until he suffered a stroke in 1972, then worked for the post office. Marcella was postmaster of the Jewell office from 1963 until 1987.

Dave said they knew their parents still had their uniforms.

“They were pretty much tucked away in a closet. We knew they had them, but never brought them out,” he said.

Dave said, “What do you do with old uniforms? You can keep them in a closet and dig them out to show the grandkids. You can give them to an actors’ studio.”

Or, they could be donated to the Ridgeville Legion post, where their parents could be honored and remembered for what they did.

Dave has been a member of the Ridgeville Corners Legion post, Ward L. Adams Post 454, for about two years. He is a National Guard veteran.

“We’d come here for fish fries, and we thought it was so neat what they do to preserve history,” he said.

Erv Haas, a Legion member from rural Napoleon, is a retired carpenter.

He builds wooden display cases with glass fronts; inside, he carefully arranges uniforms, documents, flags, and other mementos.

Ted Ripke, post commander, said Haas has made every case on display. He has been making them for about 10 years.

Haas goes beyond simply putting things in the cases.

He takes time to research a veteran’s military career.

He finds out what awards and medals a veteran is entitled to, and orders replacements for any that are lost.

Ripke said when public events are held at the Legion hall, people will slowly go from one case to the next.

“It’s a great way to honor the men and women who served.”

Dave said when they first saw the display case Haas built with their parents’ uniforms, “We weren’t disappointed. We were awestruck.

Doug said the brothers weren’t sad to give the items to the Legion.

But, he added, “Memorial Day is going to be a little tough.”