Couple To Wed In Riviera Maya 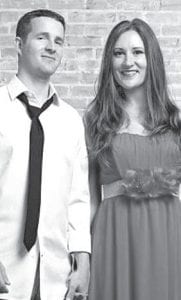 The bride-elect is the daughter of Jackie and Kevin Meyers, Archbold, and David Ballmer, Edon. An Archbold High School graduate, she earned a bachelor’s degree in fashion design and product development in 2006 from the University of Cincinnati. For the past six years she was employed at JCPenney, Plano, Texas, as its private label dress designer. She currently is employed at Altar’d State.

Her fiancé is the son of John and Jerri, Memphis, Tenn. A graduate of Houston High School, Collierville, Tenn., he earned a bachelor’s degree in aviation management in 2005 from the University of Memphis. He joined the Air National Guard in 2001, and is currently stationed in Knoxville, where he is employed as a KC-135 pilot with rank of O-2, First Lieutenant.

The couple will exchange wedding vows on Dec. 1, 2012, at the Excellence Riviera Cancun Resort in Riviera Maya, Mexico. They plan to reside in Knoxville.