Couple To Marry In Germany Nov. 11 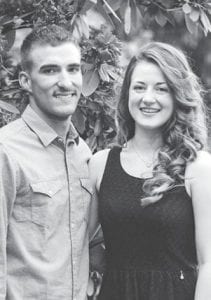 Catrina Meier-Schisslbauer and Dustin Lucas are announcing their engagement and upcoming wedding.

The bride-elect is the daughter of Tanja and Martin Schisslbauer, Sulzbach-Rosenberg, Germany, and Trevor and Carolyn Meier, Lawton, Okla. She is a 2013 graduate of Walter- Hoellerer-Realschule in Sulzbach Rosenberg and a 2016 graduate of Berufsfachschule fuer Kinderkrankenpflege in Amberg, Germany. She is a pediatric registered nurse at the Klinikum St. Marien in Amberg.

Her fiancé is the son of Mary and Paul Murcko, Archbold, and Marvin Lucas, Sanford, N.C. He is a 2012 graduate of Archbold High School and is serving in the U.S. Army as a SPC for the Field Artillery Squadron, 2nd Cavalry Regiment stationed at Camp Vilseck in Bavaria, Germany.

The couple will exchange wedding vows on Saturday, Nov. 11, 2017, at 11 am at the Sulzbach-Rosenberg Town Hall with a reception immediately following at the Hotel-Gasthaus in Sulzbach- Rosenberg.