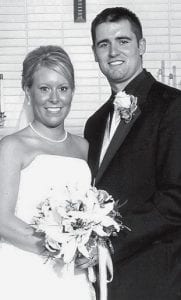 Music was presented by Steve Basselman and Deb Schnitkey.

The bride wore a white satin and taffeta gown with beaded metallic lace on the bodice and a pick-up skirt with a chapel train. The bouquet was made of white lilies with greens.

Kelly Boulton, Archbold, and Jamie Robertson, Bryan, were bridesmaids as well as Trisha Schneider, Wauseon, sister of the groom.

The best man was Bill Gearig, Wauseon. Groomsmen were Nick Ducey and Matt Johnston, Wauseon. Also serving as a groomsman was Joe Schneider, Wauseon, brotherin law of the groom.

A reception followed the cer- emony at Amvets Post 1313, Napoleon.

The couple honeymooned in St. Lucia and Aruba.

The bride is the daughter of Michael and Barbara Miller, Archbold, and is a 2002 Archbold High School graduate as well as a 2006 Bowling Green State University graduate. She is employed as a preschool teacher at Fayette Elementary.

The groom is the son of Glenn and Kay Badenhop, Archbold. He is a 2002 Archbold High School graduate, and a 2006 Ohio Sate University graduate, and employed as a purchasing manager at TruFast, Bryan.

The couple resides in Wauseon.