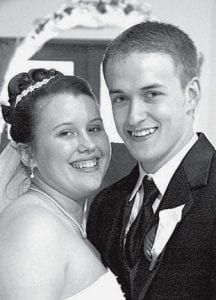 The bride wore a strapless candlelight ivory gown, and carried a bouquet of calla lilies.

The maid of honor was Catherine Rieck, Troy.

Rochelle Wyse, Archbold, cousin of the bride, was bridesmaid.

The best man was Brandon Bierly,Troy, brother of the groom.

Justin Brandt, Troy, was his groomsman.

The ushers were Ty Cheney and Wyatt Bronson, brothers of the bride.

A reception followed the ceremony at the Crossroads Church of God.

The couple spent their honeymoon on a cruise in Florida and Mexico.

The bride is the daughter of Rod and Lisa Cheney, Archbold, and Randy and Connie Sprow, Troy, and a 2005 graduate of Pike-Delta-York High School. She is employed as a classified sales representative for the Troy Daily News.

The groom is the son of Barb and Tod Bierly, Troy, and a 2005 graduate of Troy High School and Upper Valley JVS. He is employed as a supervisor by Goodwill Industries.

The couple resides in Troy.