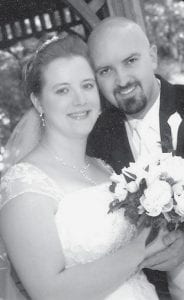 The bride is the daughter of Ron and Jane Schnipke, Cloverdale. The groom is the son of Ricky and Marcia Rae Buehrer, Stryker.

The bride was given in marriage by her father. She wore a floor-length gown of white satin. Crystal beading covered the bodice and flowed down the front in double panels that continued around to the chapellength train.

Her hair was adorned with a tiara, which held the waist-length veil. Jeweled earrings and necklace completed her attire.

She carried a bouquet of red and white roses, cala lillies, and peonies.

Bethany King was maid of honor. Bridesmaids were Lauren Piening and Alina Tilford, cousins of the bride, and Sarah Fealy. They wore matching floor-length gowns of candy apple red with rounded neckline, satin straps, and a satin sash at the empire waist.

They wore matching necklace and earrings, which were a gift from the bride. They carried bouquets of red and white roses.

The groom wore a traditional black tuxedo with a white vest, tie, and a white calla lily. The groomsmen wore matching tuxedos with candy apple red vests, ties, and a red rose.

Shawn Buehrer, nephew of the groom, was the ring bearer. He wore a one-piece tuxedo and rode down the aisle on a decorated red wagon guided by his mother, Skye Buehrer, sisterin law of the groom.

Wedding music before and after the ceremony was by Strings of Choice. Randall and Mia Pahl, cousins of the groom, led in praise and worship music and presented a duet while the bride and groom poured the unity sand.

The couple honeymooned at Hocking Hills.

The bride is a graduate of Ottoville High School and the University of Toledo. She is an intensive care unit nurse at The Toledo Hospital.

The groom is a graduate of Stryker Local Schools and the University of Toledo. He is a senior at Akron University in the nurse anesthetist program.

The couple resides in Toledo.