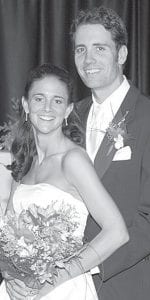 Patrick Schwenk was the officiating pastor. Music was presented by the quintet of Jan David, Mary Lou Thomas, Geraldine Kruse, Larry Kruse, aunts and uncle of bride; and James Graber, father of the bride. Kathleen Reynolds was the soloist.

The bride wore a white satin strapless dress. She carried a bouquet of wildflowers and alstromeria.

Emily Rasor, niece of the groom, Holland, was the flower girl. Joel Graber, nephew of the bride, Middlebury, Ind., was the ring bearer.

Travis Rasor, brother of the groom, Holland, was the best man.

The reception was held at Oak Shade Grove, Oregon.

The couple honeymooned for one week along the coast of Oregon.

The bride is the daughter of James and Gloria Graber, Stryker. She graduated from Defiance College in 1999 with a Bachelor of Science degree in biology, and from Mercy Integrated Clinical Laboratory Science in 2004. She is a medical technologist at Mercy Integrated Laboratories at St. Vincent Hospital, Toledo.

The groom is the son of Bruce and Christine Rasor, Elida. He graduated from Bowling Green State University in 2000, and from the Ohio State University School of Optometry in 2004. He is an optometrist at Dr. Zohn’s Optometry, Toledo.

The couple resides in Toledo.