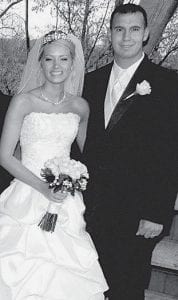 Harp and flute music was provided by Alexandria and Brianna Hogan, Defiance. Trisha Crowell, Ft. Wayne, Ind., the groom’s aunt, gave a reading, “What is Love.”

The bride, escorted by her father, wore a strapless gown of white tissue taffeta featuring pickup gathers on the skirt, and a crystal and beaded corseted bodice.

Her three-tiered cathedral veil, attached to a crystal tiara, was scattered with crystals and matched her bridal jewelry.

She carried a bouquet of 18 white roses, tied in satin ribbon and pinned with a crystal letter ‘L’ monogram charm. Vintage hankies belonging to the late grandmothers of the bride’s mother and groom’s stepmother were tucked into her garter.

The groom wore a chocolate brown tuxedo with white vest and Windsor tie. Chad Lavinder, Fayette, the groom’s brother, was the best man.

Groomsmen were Justin Rodriguez, David Sallows, Timo Salinas and Ben Sly, all of Fayette. Ushers were Jason Bat- dorf, Wauseon, brother-in-law of the bride; Seth Lavinder, brother of the groom, and Sam Beers, both of West Unity. They wore brown tuxedos with pink ties and vests.

Chase Moats, Fayette, and Benjamin Tule, Wauseon, nephew of the bride, were the ring bearers.

A dinner reception for 350 guests followed the ceremony at the Delta American Legion.

The newlyweds surprised the gathering by performing “Evolution of The Wedding Dance” following dinner.

Following a short honeymoon, the newlyweds are residing in their home in Fayette with daughters Lola and Karsyn.