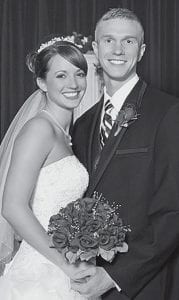 The bride wore a strapless white A-line organza and tulle gown with a chapel train, accented with vertical ruffles, beading, and lace. She had an elbow-length white veil that had one tier with a sequin edge. She also carried a bouquet of red roses.

Brayton Huffman, niece of the bride, Archbold, was flower girl.

Eddy Koby, nephew of the groom, Newark, was a junior groomsman.

The bride is the daughter of John and Deb Huffman, Archbold. She received a Bachelor of Arts degree in speech and hearing science from the Ohio State University, and is in graduate school at Indiana University studying for a doctorate of audiology.

The groom is the son of Lisa Street, Warren. He received a Bachelor of Science degree in accounting from OSU, and is employed at KPMG, LLP as an audit associate.

The couple resides in Bloomington, Ind.