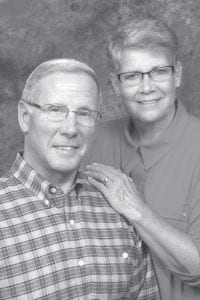 Howard and Judy Warncke are celebrating their 50th wedding anniversary.

They are the parents of two children, Tony (Missy) Warncke, Archbold, and Kris (Mike) Ritter, Wauseon. They have five grandchildren.

The couple spent Spring Break with their children and grandchildren at St. Pete’s Beach, Fla.