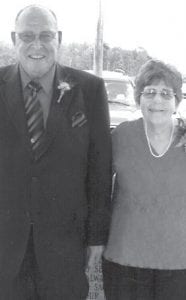 The couple will celebrate the special occasion at a family dinner. Paid Announcement