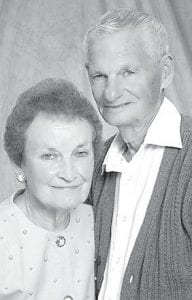 Rollin Hayes and Shirley Luke were married on Oct. 15, 1960, at the First Evangelical United Brethren Church of Montpelier.

The couple celebrated their 50th anniversary with their family at Das Essen Haus, Pettisville, and will take a trip to Yosemite National Park and the western and southwestern states.