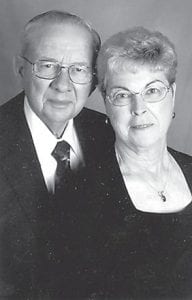 They have four sons: Douglas (Joyce), David, and Terry (Kaycie) of Defiance, and Todd (Karla), Napoleon. They have 11 grandchildren.

The couple will celebrate at an open house for family and friends, hosted by their children, at their home at 04421 Adams Ridge Road, Sunday, June 6, 2-8 p.m.