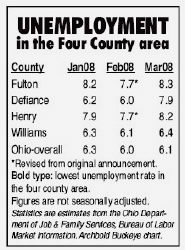 Unemployment in Fulton County jumped six-tenths of a percentage point in March, reaching 8.3%, as estimated by the Ohio Department of Job and Family Services.

Fulton County had the highest unemployment rate in the four-county area, a tenth of a point higher than Henry County, 8.2%.

Henry and Fulton counties had February unemployment of 7.8%, revised downward by a tenth of a point by ODJFS.

Defiance County’s unemployment jump from 6% in February to 7.9% in March, a 1.9 percent jump.

Williams County had the lowest rate in March, at 6.4%.

Morgan County, in southeast Ohio, had the highest unemployment in the state, at 11.2%. There were three other counties with unemployment above 10%: Pike and Meigs, 10.2%, and Huron, 10.1%.

Delaware County had the lowest at 4.1%.

All county unemployment data is not seasonally adjusted. A comparable figure for Ohio was 6.1%; the unadjusted national unemployment rate in March, as estimated by ODJFS, was 5.2%

Once seasonal adjustments are applied the Ohio unemployment is 5.7%; the U.S. figure is 5.1%.