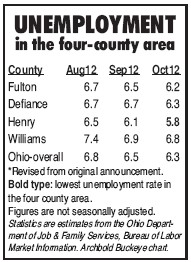 The Ohio Department of Job and Family Services announced the Fulton County October unemployment rate was 6.2%, the lowest so far this year.

Unemployment has been on a downward trend since July, when the figure spiked at 7.8%. It was 6.7% in August and 6.5% in September.

ODJFS estimated that during the month of October, Fulton County had a labor force estimated at 21,700. The number of employed workers was 20,400, with 1,300 unemployed.

The October unemployment for Ohio was 6.3%, and 7.5% for the United States.

When seasonal adjustments are applied, the state rate rises to 6.9%, while the U.S. unemployment is 7.9%.

ODJFS estimated Ohio had a total labor force of 5.8 million.

That’s comprised of more than 5.4 million employed workers, and an estimated 364,300 who are out of work.