County Unemployment Inches Up In July 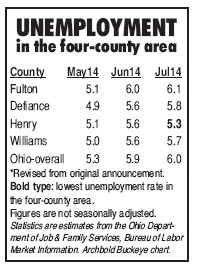 The Ohio Department of Job & Family Services announced last week that it estimates unemployment in Fulton County increased by one-tenth (.1) of one percentage point, to 6.1%, during July.

Fulton County had the highest unemployment rate in the four-county area.

Henry County, which had the lowest unemployment rate in the four-county area, had a decline of three-tenths (.3) of a percentage point, from 5.6% to 5.3%.

Since the beginning of the economic downturn, which roughly began locally in 2009, unemployment has only been below 7% seven months out of the past 68.

ODJFS estimated that during July, Fulton County’s total labor force was 22,000, with 22,600 employed and 1,300 unemployed and seeking employment.

The number of employed workers declined by 100 from June, ODJFS estimates show.

The highest rate in the state in July was in Monroe County, in southeastern Ohio on the West Virginia border, at 12.2%.

Monroe County was the only county with double-digit (10% or higher) unemployment.

Mercer County, in westcentral Ohio on the Indiana border, had an unemployment rate of 3.3%.

Holmes County, in eastcentral Ohio, was the only other Ohio county with unemployment less than 4%.

Fulton County’s rate put it in a three-way tie for 35thhighest in the state.

Comparable figures for Ohio as a whole and the United States was 6% and 6.5%, respectively.

When seasonal adjustments are applied, the Ohio unemployment rate for July was 5.7%; the national figure was 6.2%.