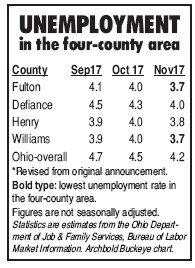 Unemployment in Fulton County during November was 3.7%, the lowest rate in the nine years the Buckeye has kept records.

This newspaper has been keeping unemployment records since December 2008, when unemployment announced by the Ohio Department of Job & Family Services was 10.5%.

Fulton County tied with Williams County for the lowest rate in the four-county area. Henry County was 3.8%; Defiance County, 4%.

Matt Gilroy, executive director of the Fulton County Economic Development Corporation, said in an email message to this newspaper that 3.7% unemployment “is fantastic news to the communities in Fulton County.

“The low unemployment rate does, however, bring challenges to employers in Fulton County and elsewhere.

“Many businesses across the region are seeking employment candidates for various types of positions. The strong demand for labor and the decreasing supply of workers (mostly due to our aging demographics) is a cause for concern over the long term.

“Fulton County, Ohio, like many rural counties across the nation, must strive toward population growth to support our employers and replace those that are leaving the workforce to enjoy retirement.

“This number means that 68 out of 100 people that reside in Fulton County and are of working age (16 and over) and are not institutionalized (full-time education, in a correctional institution, or in the military) are either employed or are seeking employment.

“For every person that is retiring from an employer in Fulton County, at least one younger person needs to be available for the business to replace that individual.”

Figures indicate Fulton County has the largest total labor force in the four-county area during November, at 22,700.

The number of employed workers was 21,900; the number of unemployed was 900. Figures do not add due to rounding.

Unemployment went down in 65 of the 88 counties in Ohio. The rate increased in 15 counties, and remained the same in eight.

The highest rate was in Monroe County, on the West Virginia border in southeastern Ohio, at 7.2%, up onetenth over October.

The lowest rate was in Mercer County, on the far western side of the state in central Ohio, at 2.7%.

All county data is not seasonally adjusted.

The unadjusted rate for Ohio and the nation as a whole are 4.2% and 3.9%, respectively.

When seasonal adjustments are applied, the national rate was 4.1%; Ohio, 4.8%.

ODJFS estimated that there are just over 3.52 million people working in the state. There were about 244,000 Ohioans unemployed, giving the state a total labor force of about 5.77 million.