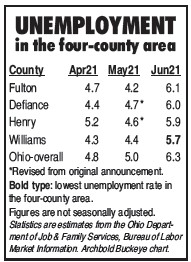 The Fulton County unemployment rate was the lowest in the four-county area during May.

But the Ohio Department of Job & Family Services announced recently that for June, Fulton County had the highest rate in the area.

ODJFS estimated that June unemployment in Fulton County was 6.1%, an increase of 1.9 percentage points.

Typically, when unemployment rates jump in the summer months, it’s attributed to the auto industry and yearly shutdowns.

Defiance, Henry, and Williams counties– the remaining three in the four-county area– had similar jumps.

Unemployment was up in each of the 88 counties in Ohio.

All county data is not seasonally adjusted. Comparable figures for the state and the nation as a whole are 6.3% and 6.1%, respectively.

When seasonal adjustments are applied, the national rate is 5.9% and the state is 5.2%.

During June, ODJFS estimated there were about 5.65 million people in the Ohio labor force, with about 5.3 million working and 354,300 unemployed.