County Unemployment Falls To 14% For May 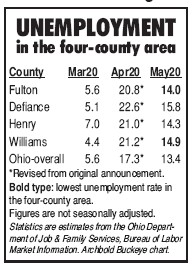 The Fulton County estimated unemployment rate for May was 14%, down 6% from April, Ohio Department of Job & Family Services officials said.

The ODJFS announced the news in a press release issued last week.

The May rate is tied for tenth-highest in the 11-plus years the Buckeye has kept records. The last time unemployment in Fulton County was 14% was in December 2009.

Matt Gilroy, executive director of the Fulton County Economic Development Corporation, said, “We are certainly glad to see unemployment numbers drop in Fulton County and throughout the region.

“There is still a significant decrease that will be needed to get back to February’s number (5.2%).

“I believe we should see a decrease again in July as workers will continue to find openings this month or return to their employer.

“I have heard from several employers that they are hiring more people than they were expecting to, because there are many high-quality employment candidates seeking work.

“Employers in a position to consider hiring should consider finding the skilled people that are available in the labor market right now.”

In the four-county area, Fulton County had the lowest May rate.

Even at the reduced rate, April represented a record high in unemployment over the past 11 years and six months.

The previous highest unemployment mark was set during the Great Recession, when Fulton County unemployment hit 16% in January 2010.

Mercer County, in westcentral Ohio on the Indiana border, held the title of lowest unemployment in the state for more than five years.

But in April and May, Holmes County, in east-central Ohio, had the lowest rate in the state; in May, the county stood at 5.1%.

Erie County, in central Ohio on the shores of Lake Erie, had the highest rate in May, taking over the post from Logan County, at 19.9%.

All county data is not seasonally adjusted. Comparable figures for Ohio and the nation as a whole were 13.4% and 13%, respectively.

There were more than 5.7 million workers in the state labor force, with close to 5 million working. The number of unemployed workers (not seasonally adjusted) was estimated at 768,400.