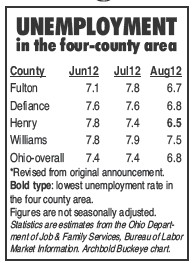 For the last few years, unemployment has spiked in July. Officials of the Ohio Department of Job and Family Services, Labor Market Information division, partially attribute the spike to annual model changeover shutdowns in the auto industry.

ODJFS estimated there were 1,500 workers unemployed and seeking employment in August. Another 20,200 were employed, for a total labor force of 21,700.

ODJFS said that during August, Fulton County was in a three-way tie with Greene and Wyandot counties for 53rd-highest unem- ployment rate in the state.

The August unadjusted unemployment rates for the state and the nation were 6.8% and 8.2%, respectively.

After seasonal adjustments are applied, the ODJFS estimated that Ohio’s August unemployment was 7.2% and the national rate was 8.1%.