County Unemployment Down To 9.3% 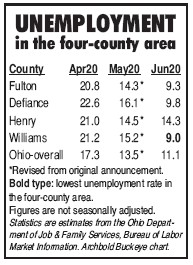 Fulton County unemployment during June was down to an estimated 9.3%, the third straight month of decline.

The Ohio Department of Job & Family Services announced unemployment for each of the 88 counties, Tuesday, July 21.

Fulton County unemployment peaked in April at 21.1%, as much of the economy was shut down due to the Coronavirus pandemic. In fact, the April rate was the highest Fulton County rate in the past 11 years and seven months, the time period for which the Buckeye has detailed records.

In May, the Fulton County rate was initially announced at 14%, but was revised to 14.3% with June statistics.

All counties in the fourcounty area were under double digits.

ODJFS estimated there were 21,900 people in the county labor force, with 19,800 employed and 2,000 unemployed. Figures do not add due to rounding.

During June, Holmes County, in east-central Ohio, had the lowest rate in the state, at 5%, down from 5.1% in May. June was the third straight month the county held the lowest-rate title.

The highest rate was in Cuyahoga County, on the shores of Lake Erie in northeast Ohio, at 15.2%. It was the first month Cuyahoga County held the title.

All county data is not seasonably adjusted. The unadjusted rates for Ohio and the nation were 11.1% and 11.2%, respectively.

During June, there were more than 5.8 million people in the Ohio labor force, with about 5.2 million working and 650,272 out of work.