County Unemployment Down To 5.4% In March 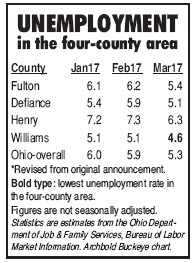 The Fulton County unemployment rate for March was 5.4%, down eight-tenths (0.8) of one percentage point from February, when the Ohio Department of Job and Family Services estimated unemployment was 6.2%.

The reduction follows a typical pattern where unemployment starts the year at a high point, then declines as the year goes on. A summer spike is not unusual.

Across the state, unemployment fell in 85 of Ohio’s 88 counties, including each of the counties in the fourcounty area.

March marks the 100th straight month that this newspaper has closely tracked unemployment in the county.

A simple average (unemployment rates for each month totaled, then divided by 100) reveal an average monthly rate of 8.3%.

ODJFS estimated that in March, there were 21,900 employed individuals in Fulton County with 1,300 out of work, giving the county a total labor force of 23,100. Figures do not add due to rounding.

Mercer County, in eastcentral Ohio on the Indiana border, had the lowest unemployment in March, at 3%.

Mercer County has had the lowest rate in the state for the last 12 consecutive months.

Monroe County, in southwest Ohio, had the highest rate, at 9.6%.

Monroe County has had the highest rate for at least 18 straight months. Only three Ohio counties– Monroe, Jackson, and Trumbull– had rates of 9% or higher.

All county data is not seasonally adjusted. The comparable rates for Ohio as a whole and the nation were 5.3% and 4.6%, respectively.

During March, there were more than 5.7 million individuals in the state’s workforce. About 5.4 million were employed and 302,000 were out of work.