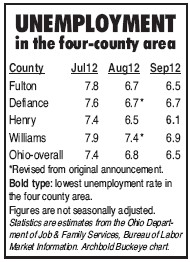 The Fulton County unemployment rate for September was 6.5%, the Ohio Department of Job & Family Services announced.

It is the lowest unemployment has been in 2012, and the lowest since November 2007.

After starting the year at 10%, ODJFS estimated unemployment in Fulton County decreased to 7% in May. It inched up to 7.1% in June, then jumped to 7.8% in July, which is typical for the county.

ODJFS officials attribute the July jump to the annual model changeover shutdown in the auto industry.

Since July, unemployment fell to 6.7% in August and 6.5% in September.

ODJFS estimated that during September there were 1,400 people out of work and looking for a job in Fulton County. There were 20,200 employed workers, for a total county labor force of 21,600.

Out of Ohio’s 88 counties, Fulton County tied with Stark County, in eastern Ohio, for the 49th-highest unemployment rate.

Unemployment in Ohio ranged from 11.5% in Pike County, in south-central Ohio, to 3.9% in Mercer County, in central Ohio on the Indiana border.

Three counties had unemployment of 10% or higher. In addition to Pike County, Jefferson County had 10.6% unemployment and Meigs County was at 10.7%.

All county unemployment data is not seasonally adjusted. Unadjusted unemployment rates for the month of September, as estimated by ODJFS, were 6.5% for the state, and 7.6% for the nation.

When seasonal adjustments are applied, the Ohio rate increases to 7%, while the national unemployment rate goes to 7.8%.

ODJFS estimated that during September, there were close to 5.8 million workers in the Ohio labor force. Of those, about 5.4 million were employed. There were about 377,500 Ohioans out of work during September.