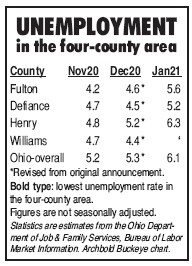 The Fulton County unemployment rate during January was estimated at 5.6%, up a full percentage point from the revised December rate of 4.6%.

Those are just some of the statistics released by the Ohio Department of Job & Family Services recently.

Unemployment typically peaks during January. In the last 12 years, Fulton County unemployment has peaked during the first month of the year nine times. Unemployment rates for those peaks ranged from 5.4% in 2018 to 16% in 2011.

Williams County had the lowest rate in the four-county area, at 4.9%, followed by Defiance County at 5.2%, Fulton County, and Henry County at 6.3%.

Fulton County was in a five-way tie for the 48thhighest rate. Franklin, Hardin, Portage and Tuscarawas counties also were at 5.6%.

ODJFS estimated that during January, 1,200 people were out of work in Fulton County. With 20,300 workers employed, that makes the total labor force 21,500.

In the last 12 years and two months this newspaper has been keeping records, Fulton County had 5.6% unemployment only one other occasion, in March 2016.

All county unemployment data is not seasonally adjusted. Comparable rates for Ohio and U.S. as a whole were 5.3% and 6.3%, respectively.

When seasonal adjustments are applied, the rate for Ohio was 6.1%, while the national rate is 6.8%.

There were almost 5.7 million people in the workforce, with about 5.4 million working and 344,500 unemployed.