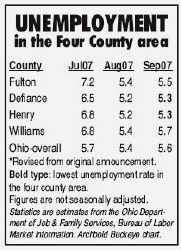 For the second month in a row, Defiance and Henry counties tied for the lowest unemployment rate the in the four county area, at 5.3%. Williams County had the highest rate for September, at 5.7% as estimated by ODJFS.

ODJFS estimated during September, there were 23,700 persons in Fulton County labor force. Of those workers, 22,400 were employed, and 1,300 out of work.

Mercer County, on the Indiana border in west central Ohio, had unemployment of 4%, low- est in the state in September, to a high of 9.2% in Meigs County, in southeastern Ohio along the Ohio River.

All county unemployment data is not seasonally adjusted. Comparable figures for the state of Ohio, and the United States were 4.5% and 5.6%, respectively.

When seasonal adjustments are applied, the September national unemployment rate becomes 4.76%, while the Ohio rate is 5.9%