Vond Hall, county administrator, said full data from the Department of Taxation was not available, so he had not had a chance to analyze the figures.

County businesses collect sales taxes from some goods and services purchased or obtained in the county. Merchants take 7% of their sales and pay that amount to the Ohio Department of Taxation.

The Department of Taxation takes the state’s 5.5% share of the total sales tax, and returns a 1.5% share to Fulton County.

It takes about three months for the Department of Taxation to collect a onemonth sales tax, make its calculations, and then send a check back containing the county share. 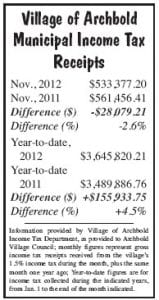 So, revenue received in 2012 is from taxes on sales paid in September.

The Fulton County sales tax rate used to be 6.5%. County commissioners approved raising the county share of the sales tax from 1% to 1.5% in September 2009, after responding to shortfalls in the county budget.

After another 1/2 percent was added to the county sales tax rate, the total collection increased more than $1.5 million for 2010, hitting a new high of just over $5.2 million.