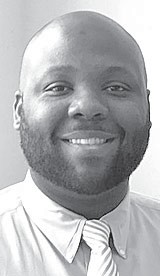 Fulton County officials went both far and near for their new director of the county Emergency Management Agency.

Kelvin Freeman, the man selected for the job, is a native of North Carolina, but was hired away from neighboring Henry County.

“From 2015 to 2017, I was employed at the Henry County General Health District in Napoleon,” he said.

There, he served as the health district emergency response coordinator.

In a press release, Toni Schindler, director of marketing and communications for Fulton County, said Freeman’s passion for emergency management and planning was shaped by personal experience during Hurricane Floyd.

Floyd hit the eastern coast of the United States in late September 1999. Floods caused by the storm ravished his hometown and county in North Carolina.

“I actually changed my career path from pre-med to public health and emergency management after Floyd,” he said.

“I look forward to bringing that passion and experience with me to Fulton County.”

He earned a bachelor’s degree in 2007, followed by a master’s degree in 2010 in public health. Both degrees came from East Carolina University, Greenville, N.C.

From 2011-2013, he was regional planning consultant for the North Carolina Division of Public Health, Preparedness & Response Branch.

Freeman is currently pursuing a doctor of philosophy in health education from UT. He is expected to graduate in 2018.

In addition to his academic degrees, Freeman has been named a lieutenant junior grade with the United States Public Health Service.

He started his new job Wednesday, May 17.

He told Shindler, “What I am most excited about for this position is the autonomy of working with so many people, municipalities and agencies.”

When asked about this role, Freeman said, “The local emergency manager has the day-to-day authority and responsibility for overseeing emergency management programs and activities.”

“My motto is research, plan, and act.”